Leaders: Drive Your Message Through the Frozen Middle

Senior leaders often need to communicate messages to all employees. However, not all messages get through. This article describes how to fix that.

Here’s a quick video introduction
by Wendi and Bill.

The Frozen Middle is how executives often describe mid-level leaders who shrug off senior-level direction. Even for something as simple and vital as conveying messages to the rest of the workforce, those mid-level folks sometimes appear to think “Insulate” rather than “Communicate.”

But let’s not blame those leaders. They’re just responding to their own priorities, which include what and how they want to communicate. Fortunately, there are tactics that senior-level bosses can use to fix the problem. To understand them, it helps to first understand the Vertical Value Chain.

In a well-running organization, every layer adds value. That includes anything that flows from one layer to another. In our leadership classes, we call this idea the Vertical Value Chain. 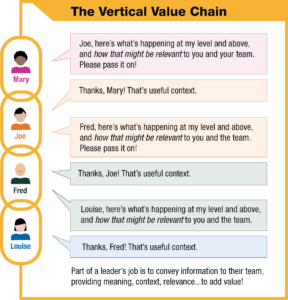 For example, right now a client of ours is cascading a strategic plan down their organization—with leaders at all levels adding value.

Problems Communicating Down the Value Chain

So what’s the problem when communication doesn’t flow down effectively?

First—and most obviously—a mid-level leader may simply fail to relay information down the chain of command. Say a director attends an EVP’s meeting. Important stuff gets announced, discussed, or decided. And then the director goes back to their subordinates…and doesn’t mention any of it. Relaying such organization-wide information may simply not cross their minds, or it may get pushed aside by more pressing matters.

The second mistake is subtler: non-translation. Every layer of an organization needs to receive information in a way that’s meaningful and relevant to them. A typical example of non-translation: Employing a slide deck, a CEO presents an important new initiative to their EVPs, intending that the information be shared down the line. But the EVPs share only the slide deck with their subordinates, with no further explanation or tie-in to the work done at each level.

This sleight-of-hand gives the pleasant appearance of communication, but without the bother of actually doing it. “Information” isn’t informative until it’s put into meaningful context for each audience.

The Solution: Back to Basics

Given these two issues, there are a couple of basic skills senior leaders need to use that will ensure that information effectively flows down the Vertical Value Chain:

Expect communication: When we say “expect,” we mean spell out to direct reports their accountability for down-the-line communication. Have a deliberate conversation about this expectation; don’t just mention it in passing. Explicitly convey, for example, that relaying information down the organization is essential to the job of every leader at every level. That includes putting information into recipients’ frame of reference, so they understand and care about the message. It also means helping people connect their own work to the bigger picture and higher purpose of the organization, as we’ve written about for senior military leaders here.

Inspect communication: In this case, “inspect” means touching base with the supposed recipients of a down-the-line communication. For example, in a brief hallway exchange an executive might ask someone two or three levels below, “What do you think about that new personnel policy we announced last week?” If the exec gets a lousy answer—“Huh? What personnel policy?”—then it’s good to cast a wider net by asking a few more people the same question. If the executive keeps hearing lousy answers, then it’s time for a conversation with the person who was supposed to have relayed the message. (On the other hand, if the mid-level manager is communicating well, then a kind word about that would be in order.)

Bring Mid-Levels into the Huddle

Some messages need to come directly from the top brass. That includes company relocation, acquisition, divestiture, downsizing, restructuring, and so on. Big stuff. Communication vehicles might include an all-hands Zoom meeting, a video-based announcement, or an email.

But are we now cutting out those mid-level leaders? Remember, you need them to help ensure that your message is heard, understood, and maybe even embraced. What you don’t want are conversations down the ranks like this:

“Hey, boss, what’s the story on that thing the CEO announced today?”

What’s the fix? Involve the mid-levels in the communication before everybody else receives it.

For example, hold your Zoom session with them first to make sure they understand the pending announcement and can explain it themselves. Give them more information than you’ll give the whole crowd, and more time to think about it, so they can answer questions and look smart.

Will rumors leak out if the mid-levels are involved? Sure. But it’s worth drawing them into the effort and creating informed allies.

To our knowledge, this whole two-step approach was first researched by anthropologists trying to help nongovernmental organizations promote the use of condoms in African villages. The NGOs had been speaking directly to the villagers, and it wasn’t working. But when they first approached the traditional healer in each village and apprised them of the intent and message, it made a world of difference. Never end-run the local authorities!

For senior leaders to communicate to their entire organizations, every link in their Vertical Value Chain must be strong. Each layer must add value, not just relaying the information, but also making it clear and relevant to employees.

Big announcements affecting the entire organization should come directly from senior leadership. However, mid-level leaders need to be clued in before the rest of the organization. That way, those leaders will be more inclined to support the message and will be able to explain or elaborate on it.

Communication is a vital task for any organization—but it is a task, and it can be delegated using time-tested leadership principles. Just one “frozen” manager in the chain of command can break the chain of communication, leaving everyone below them in the dark. Instead, work to develop an intellectual bucket brigade, where all brains are required, and all layers add value.

Please let us know if you’d like a conversation about how your team might be helped by our team
– Wendi Peck, CEO
[email protected]

Get your Executive Smarts book